skip to main | skip to sidebar

Michael Savage doesn't get to invent his own facts

I am not a big fan of Michael Savage, but the radio was on the station that carries his program when I went to the store. Savage was having a rather hostile discussion with a caller about the George Zimmerman murder trial and was going on and on about how Zimmerman was carrying a cocked gun with a round in the chamber with the safety off. He was apparently using these "facts" in an attempt to prove that Zimmerman intended to kill someone the night Trayvon Martin died.

First, you're wrong about a pistol carried with a round in the chamber being indicative of intent to kill, because police officers carry their pistols with loaded chambers. Is it your contention that the police carry chamber-loaded handguns because they intend to kill someone? If that were the case, don't you think that there would be a lot more police-involved shootings than there are?

Secondly, you're wrong because the pistol that George Zimmerman used that night was a nine millimeter Kel-Tec P-11 semiautomatic. You claimed that he was carrying this pistol cocked with the safety off, didn't you? Well, there's a problem with that: The Kel-Tec P-11 is double action only (DAO) so it cannot be cocked and it doesn't have a safety. Essentially, Savage, the pistol George Zimmerman was carrying that night was just like a double action revolver except it holds more ammunition. It has a long, relatively heavy trigger pull that takes a very deliberate pull on the trigger to fire it.

Then you described George Zimmerman as "a hulking man." Okay, maybe I'm a bit biased here because reports of Zimmerman's height and weight at the time of Trayvon Martin's death as 5'7" to 5'8" and 185 to 200 pounds. If that describes a "hulking man" then I must be the Incredible Hulk.

How about we wait until the trial is over to find out if the prosecution proved Zimmerman guilty beyond a reason, Savage?

Posted by Elm Creek Smith at 21:14 No comments:

On March 6th I passed the one year anniversary of my prostate surgery and am still doing well and cancer-free. Back in January, I got tired of my increasingly sedentary lifestyle which my work seemed to encourage. An eleven hour shift controlling access to a secure facility doesn't do much other than develop powerful muscles that allow you to sit for long hours without tiring. I started climbing stairs on my breaks. As of this week I'm climbing 13 stories twice in the  morning and walking back down. I walk down 20 stories twice in the afternoon. I'm not on the shape I want yet, but I'm  getting there.

Also, we had another round of qualifications, and I scored 100% again. Not bad for an old fat man with a revolver.

Posted by Elm Creek Smith at 19:44 No comments:

It Used To Be Such A Nice Little Rifle...

Several years ago, I got a .223 Rem/5.56X45mm NATO Ruger Mini-14 Ranch Rifle for Christmas. It has served nicely as a truck gun, coyote swatter, and critter getter equipped with an old Weaver 2.5 rifle scope. It hasn't been able to compete with my brother's Colt HBAR in shooting tiny groups on the range, but it has fed and fired everything I've stuffed in the magazine, including dinged and dented ammo that my brother's HBAR tore up. The only thing the Mini-14 didn't do was look like an evil assault weapon. 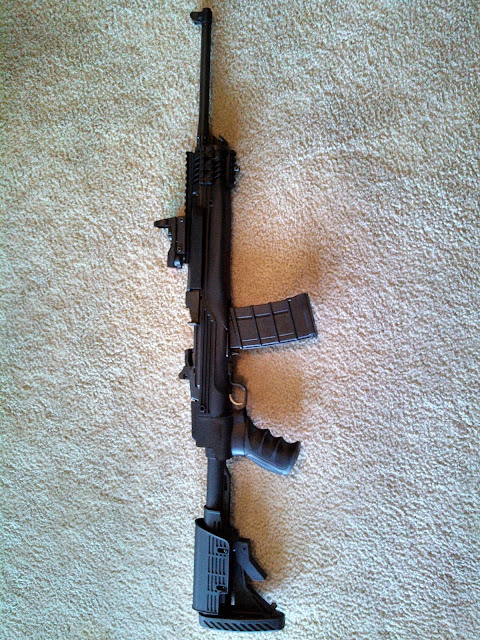 I replaced the wooden stock with an ATI Strikeforce stock that adjusts for length of pull and folds. I put all four rails from the package on the forend and mounted a red dot reflex sight on the top rail. Now, I'll just wait for Senator Dianne Feinkenstein's head to explode since the stock Ruger Mini-14 wasn't on her AWB list.

ECS
Posted by Elm Creek Smith at 14:08 No comments:

An 11-year-old boy was riding a bike through his Washington, D.C. neighborhood when he encountered a trio of unleashed pit bulls. The pit bulls viciously attacked the boy, with the young man’s uncle later recalling that all three of the dogs were biting the boy’s limbs. A neighbor who witnessed the attack went home, retrieved a pistol, and fired at the dogs, striking one. The sound of gunfire alerted a police officer to the attack, and once on the scene the officer dispatched the other two dogs. Following the attack, the boy was taken to a local hospital and underwent surgery.

So, this guy saves a child's life, and HE might go to jail. What ever happened to President Barack Hussein Obama's, "...if there is a step that we can take that will save even one child from what happened in Newtown, we should take that step.” Well, perhaps getting eaten alive by pitbulls isn't exactly what happened to the children in Newtown, but doesn't the same thing hold true here?

Posted by Elm Creek Smith at 12:39 No comments:

Sorry, folks, but I was kinda busy at work last month and this month, so I neglected to update my prostate cancer recovery. During my last check-up, I'm still at 0.0 PSA level. (Cue: wild cheering masses)

Guys, this is important. Once you get into your 40's, or if you notice a change in your urinary patterns even before that, ensure that your primary care physician is checking your PSA levels, and providing you the results. If your PCP refuses to do this, get another doctor! There are all sorts of treatment options if you get diagnosed with prostate cancer as I was, but, if you don't know you have it, your options will be even more limited.

ECS
Posted by Elm Creek Smith at 11:21 No comments:

An Apology (?) To A Stolen Valor "Suspect"

The say there's no apology like a sincere apology. Since the sincerity of the following is in doubt, grave doubt, all I can say is enjoy:  http://thisainthell.us/blog/?p=33851

I received this on Tuesday in response to my message to Senator Inhofe advising him that in the event Senator Feinkenstein's updated so-called Assault Weapons Ban passes Congress and is signed by the President that "I shall not comply."

Thank you for contacting me about the Second Amendment. As your voice in Washington, I appreciate knowing your views.

In 1994, the assault weapons ban established a comprehensive regulatory scheme of prohibiting the manufacture, transfer, or possession of assault weapons, as well as the possession or transfer of large capacity ammunition feeding devices that hold more than 10 rounds. These magazines are used by millions of Americans and are customary in handguns and other firearms. Nineteen specific weapons and their copycats were banned by the original legislation signed into law by President Clinton on September 13, 1994. The weapons ban was contained in a larger Violent Crime Control and Law Enforcement Act of 1994, and expired on September 13, 2004. As a member of the House of Representatives in 1994, I voted against the Violent Crime Control and Law Enforcement Act of 1994 because of the undue restrictions on weapons, among other reasons.

While supporters of the ban may point out that the violent crime rate dropped after the 1994 ban, they do not mention that violent crime was dropping before the ban was instituted in 1994 and that gun ownership, including ownership of newer designs of the banned weapons, rose during that same time period. It is also important to note that these weapons were rarely used in the commission of crimes before the 1994 ban.

Additionally, a provision of the 1994 law required a study of the effectiveness of the weapons ban. The Congressional study showed that, according to police reports and federal felon surveys, the type of weapons banned in 1994 were only used in one to two percent of violent crimes. Murders committed by knives, clubs, and bare hands outnumbered murders by weapons 20 to one. According to a recent study, existing data does not show whether the number of people shot and killed with semi-automatic assault weapons declined during the 10-year period (1994-2004).

Should any attempt be made to reinstate the semi-automatic assault weapons ban, I will strongly oppose it. Law-abiding gun owners should be free to use their firearms for hunting, marksmanship, and self-defense. The statistics demonstrate that a true ban on these weapons will not significantly decrease crime but will significantly decrease our rights guaranteed by the Constitution. When I was sworn in as a member of Congress, I took an oath to uphold and defend the Constitution. As your representative in the Senate, I will continue to staunchly oppose any attempt to tamper with our nation's Constitution or undermine our Second Amendment rights.
Sincerely,

Thank you, Senator Inhofe, for your support of our constitutionally-guaranteed right to keep and bear arms.

ECS
Posted by Elm Creek Smith at 07:31 No comments:

Elm Creek Smith
Owasso, OK, United States
I like a liberal amount of sour-mash whiskey in my glass. That's about it as far as liberalism goes.